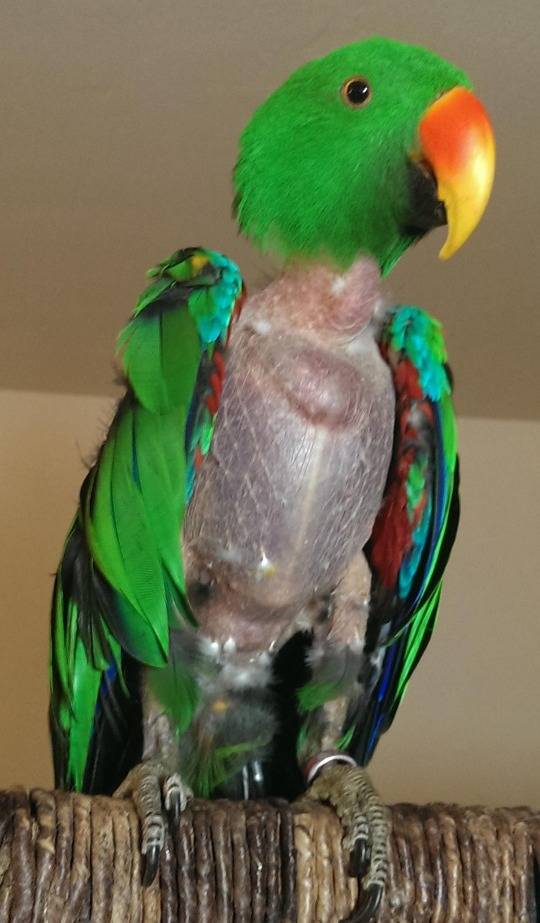 Dexter arrived at our "Providence Sanctuary" during the Winter Holiday Season of 2011; his legband indicates that he was hatched in 1998, so he is no "Spring chicken" so to speak. Most captive Eclecti only live to be 12-15 years old!

Dexter came to us with liver damage due to what we believe was metal toxicity and possibly iron overload disease from commercial bird foods manufactured with heavy metal equipment. No, we don't have any solid proof, but we do know that Dexter has been on pelleted diets most of his life and he is old enough to have been feed commercial bird foods made by heavy metal equipment long before manufacturers realized that the metal was rubbing off on the food as it was being processed. Dexter exhibits all the signs of metal toxcity; the constant overgrown beak, the dark streaks in the feathers, the constant crankiness, the every-so-often off-colored droppings.

We went right to work detoxing Dexter by removing the pelleted diet and placing him on our Eclectus BirD-elicious!™ diet! He was on that diet until we formulated the highly specialized diet for feather destroyers. He is now on the "Mutilation Syndrome Program™" along with most of our other sanctuary birds and doing absolutely wonderful!

Like Caesar Dexter comes from a home where both caregivers where cancer patients undergoing chemotherapy and radiation. Unfortunately they handled their birds transferring those toxins to their birds. It is our belief that both Dexter and Caesar now have permanently damaged feather follicles that will never again produce feathers due to the toxins from the chemo and radiation, but we will not give up hope!

After 3 long years of detox and now the Mutilation Syndrom Program Dexter is on we are actually beginning to see feathers in places on Dexter we have never seen them before!

Our private sanctuary is NOT a sanctioned 501(c)3. In other words, we do not solicicit the public on a regular basis for charitible, tax-deductible donations.

Instead our sanctuary is funded solely by any profit our business generates from the sale of our food and toys from this website and our own personal funds, period. We do not "live" off the sales from our website; all monies earned support our sanctuary and progressive avian nutritional research.