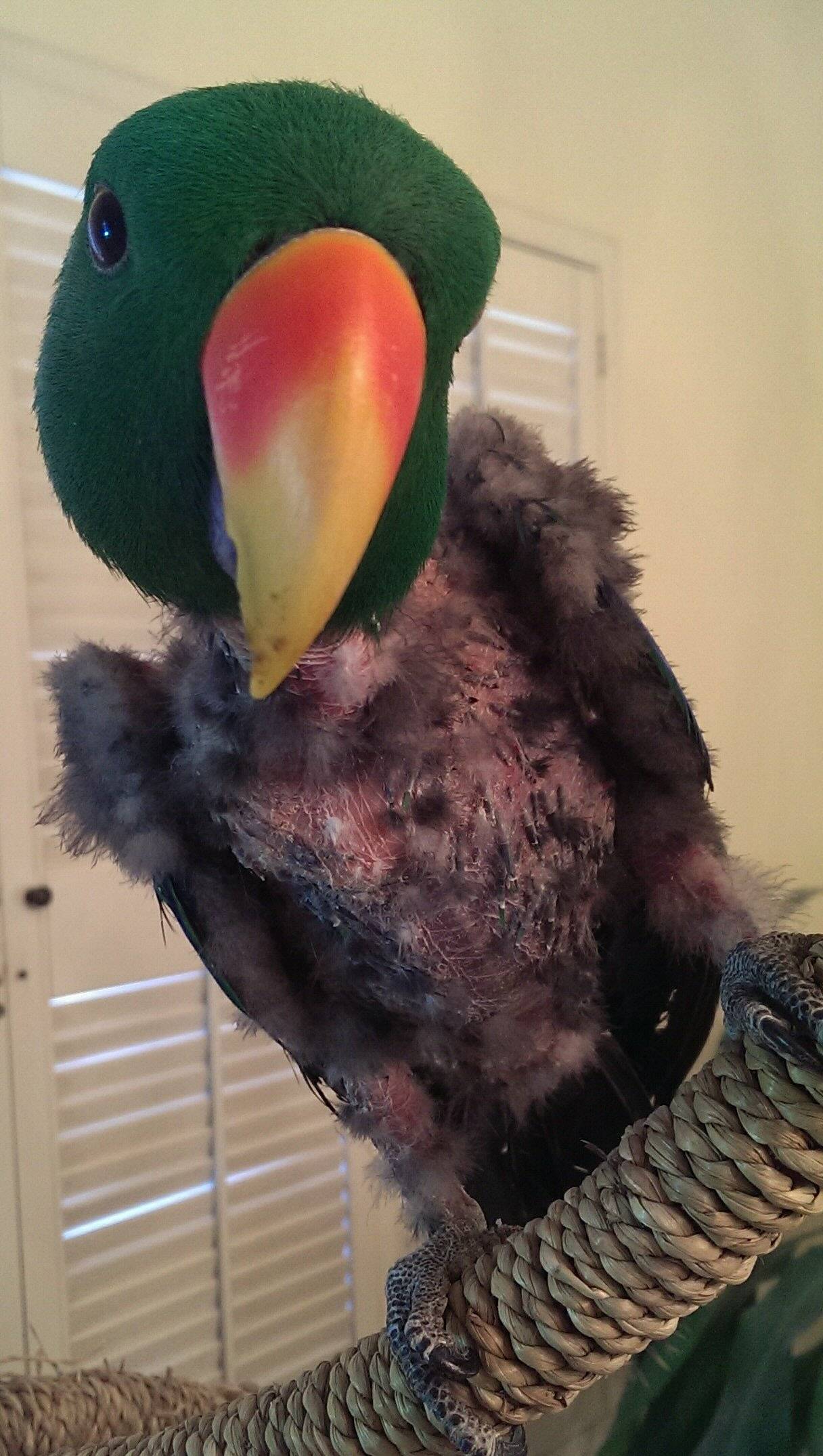 Gizmo arrived July 2013 at “Providence”. In fact he is the reason we changed our sanctuary’s name from “Passion’s Tree of Life” to “Providence”! It was sheer providence that Gizmo ended up in our permanent resident sanctuary, but that’s the back story to Gizmo’s living with our flock!

The real reason Gizmo is with us is because he is the mascot behind our “Mutilation Syndrome Program™”! If it were not for Gizmo and the very highly sensitive problems he has with feather destruction there probably would be no Mutilation Syndrome Program even with all of the advances we had already made in the research and development of our feather destruction protocols. Yes, it was Gizmo that helped us jump light years beyond where we already were!

Once Gizmo arrived at our sanctuary we did what we normally do; we placed him on our BirD-elicious! Origins Wild Diet® food. Up until Gizmo every bird adjusted to BirD-elicious!™ just fine. Yeah, the picking and plucking would continue, but to a great degree less than on the other commercial foods they had been on. Not with Gizmo, his feather destruction actually increased so badly that he began ripping and tearing at his skin. He began wheezing and sneezing. He was already toe-tapping and wing-flipping upon his arrival, so that had to be dealt with too. At one point we thought he was going to actually succumb to anaphylactic shock! Gizmo was in really, really bad shape.

Through research I found that a certain type of naturally occurring of phenol, a food constituent known as a “salicylate” can cause all of the above reactions. I immediately removed the BirD-elicious! Origins Wild Diet® food from his diet and began feeding him fruits indigenous to his original habit that were low in salicylates. Almost overnight all of his symptoms came to a halt! I knew I was on to something.

It was from that point forward the “Mutilation Syndrome Program™” began to unfold as a multi-phased diet plan for feather destroyers. Now almost all of our birds at “Providence” are on this program; all those birds that engage in feather destruction, mutilate, or have seizures, or prolapse. I believe this program will even help birds with PDD.

Gizmo’s detox and healing has really just started. It may take as long as three years to see any real improvement and as long as five years before we see any real new feather growth that actually stays.

Our private sanctuary is NOT a sanctioned 501(c)3. In other words, we do not solicicit the public on a regular basis for charitible, tax-deductible donations.

Instead our sanctuary is funded solely by any profit our business generates from the sale of our food and toys from this website and our own personal funds, period. We do not "live" off the sales from our website; all monies earned support our sanctuary and progressive avian nutritional research.